Charity’s acts of kindness always end in disaster, but when one clown costume too many lands her in the Vice Principal’s office, she receives a mysterious note from a group called “The Cassandra Coalition,” asking her if she wants to be rid of the curse that seems to follow her.

The teens of the coalition claim to be cursed by a mirror world connected with their hometown known as Delphos. To make things worse, Delphos appears to be invading their world and turning people into zombies—either that, or someone switched all the coffee to decaf.

When one of their members goes missing, they’ll try to track her down, close the portal to their world, and find a way to end their curse, before the curse ends them.

Hope Bolinger is literary agent, freelance author and editor, YA novelist, and obsessed with anything to do with theater.

When she isn’t busy adding to her 600+ bylines, or showing up in her town square dressed as Red Riding Hood, she loves to connect with readers. Find her at hopebolinger.com or connect with her @hopebolinger

Ivy Hope is just trying to get by. On a good day, her family barely has enough to eat, and now that her brother is ill, they don’t even have that. That’s how Ivy finds herself begging to dance at Red’s, a high-end club in Manhattan. Ivy thinks dancing is her chance to finally get her family out of debt, but before she can take the stage, she finds herself in the wrong place at the worst time and becomes the only witness to a murder that could put Marco Blanchi in prison for good.

Now, Marco must figure out a way to keep Ivy from talking, and she must keep herself alive long enough to figure out what her silence is worth to this mafia prince.

Mafia Prince is the second book in the Crowned Criminals series. While it is not necessary to read, Mafia Princess first, situations and characters will be referenced in this story. Please note that this is a dark romance not suitable for those under eighteen.

Kennedy Slope has always had a wandering mind. She’s written a million romances in her head, but “The Duke’s Contract,” is the first one she’s decided to share with the world. In her past lives, she has been a teacher, a waitress, and for a brief moment, she sold copiers. Currently, she resides in Virginia with her husband where she enjoys drinking too much coffee and binge-watching HGTV.

With a foreword by Neil Gaiman, the first-ever English translation of the Japanese classic that has sold over two million copies worldwide, 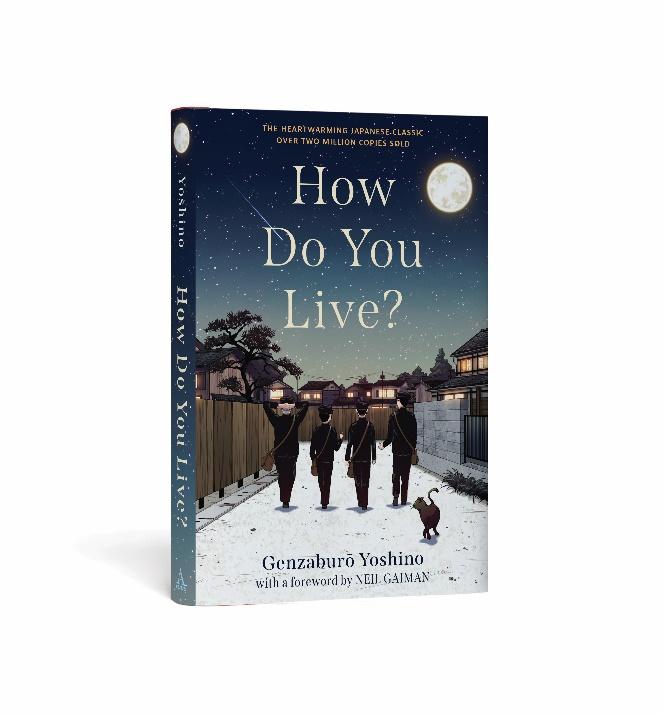 “A teen ponders the complexities of life, history, and humanity in this 1937 classic from Japan being animated by Hayao Miyazaki… Simple and beautiful seasonal details reflect Copper’s emotional journey. Small glimpses into prewar Japanese life and culture, including tofu making, school social hierarchies, city life, and the intricacies and symbolism of words, contribute to the atmosphere. A foreword by Neil Gaiman perfectly captures the mood and significance of this book, a childhood favorite of Miyazaki’s and one that is sure to find a select, but eager, readership outside its homeland. A quiet, introspective look at life and how to be human.”
–Kirkus Reviews (starred review)

“A deeply thoughtful Japanese classic…a gentle tale of self-discovery and reflection, and a compassionate guidebook on integrity punctuated by rich sensory details…Yoshino’s timeless lessons will resonate with sensitive readers young and old.”

First published in 1937, Genzaburo Yoshino’s enchanting novel HOW DO YOU LIVE? is (Publication Date: October 26, 2021; $17.95) finally available in English for the first time. Award-winning filmmaker Hayao Miyazaki (Spirited Away, Howl’s Moving Castle) has long referred to this coming-of-age classic beloved by millions of Japanese readers as not only a major influence on his work but also his favorite childhood book, and he has recently announced plans to base his final film on it. Brilliantly translated by Bruno Navasky and with a foreword by fantasy master Neil Gaiman, who wrote the English-language adaptation of Miyazaki’s Princess Mononoke, this new edition will introduce legions of new readers to Yoshino’s timeless tale.

HOW DO YOU LIVE? begins with fifteen-year-old Copper, who has recently suffered the loss of his father, gazing out over his hometown of Tokyo, watching the thousands of people below, and beginning to ponder life’s big questions. How many people are in the world? What do their lives look like? Are humans really made of molecules? The book moves between Copper’s story and his uncle’s journal entries, in which he gives advice and helps Copper learn pivotal truths about the way the world works. Over the course of a year in his life, Copper, like his namesake Copernicus, embarks on a journey of philosophical enlightenment, and uses his discoveries about the heavens, earth and human nature to determine the best way to live. Yoshino perfectly captures the beauty and strangeness of pre-war Japan – the changing of the seasons, the fried tofu and taiyaki stands, and the lush landscapes, as Copper explores the city on his bike and learns from friends and family what really matters most in life. “It’s funny and sad in a particularly Japanese way. As I read more of the book, I discovered that it contains lessons on everything: art, science, language, history, politics and philosophy,” translator Bruno Navasky writes. “It also contains a quiet but powerful message on the value of thinking for oneself and standing up for others during troubled times.”

ABOUT THE AUTHOR:
Genzaburō Yoshino (1899-1981) was a Japanese writer and publisher. In 1935, he became director of a collection of educational books for young people. Yoshino stepped in to write How Do You Live? when Yūzō Yamamoto, the expected writer, fell ill. Since its debut as a novel and guide to philosophy for young people, How Do You Live? has been re-edited and republished more than eighty times, a reflection of the changing times and culture in Japan.

Bruno Navasky is a teacher and writer, whose work as a translator and editor includes Festival in My Heart: Poems by Japanese Children and Poem in Your Pocket for Young Poets. He was the founding editor of American Poet, the journal of The Academy of American Poets, where he now serves on the board of directors. He lives and works in New York City.

How Do You Live?

In this raucous psychological thriller, a disillusioned millennial joins a cliquey fan club, only to discover that the group is bound together by something darker than devotion.

Day after day our narrator searches for meaning beyond her vacuous job at a women’s lifestyle website – entering text into a computer system while she watches their beauty editor unwrap box after box of perfectly packaged bits of happiness. Then, one night at a dive bar, she hears a message in the newest single by international pop-star Adriana Argento, and she is struck. Soon she loses herself to the online fandom, a community whose members feverishly track Adriana’s every move.

When a colleague notices her obsession, she’s invited to join an enigmatic group of adult Adriana superfans who call themselves the Ivies and worship her music in witchy, candlelit listening parties. As the narrator becomes more entrenched in the group, she gets closer to uncovering the sinister secrets that bind them together – while simultaneously losing her grip on reality.

With caustic wit and hypnotic writing, this unsparingly critical thrill ride through millennial life examines all that is wrong in our celebrity-obsessed internet age and how easy it is to lose yourself in it.

When I first read the synopsis of this book I was intrigued. This was a unique and interesting read! The book explores celebrity obsession and what happens when people take it too far. I enjoyed the writing and the dark feel of this thriller! I really enjoyed this book!

Erin Mayer is a freelance writer and editor based in Maine. Her work has appeared in Business Insider, Man Repeller, Literary Hub, and others. She was previously an associate fashion and beauty editor at Bustle.com.